Sufism, also known as Tasawwuf, is also a science in Islam and one who seeks to acquire this knowledge is called a Salik, Mureed, Disciple. We will often use the word “Mureed” on our site.

Sufism is a spiritual path in Islam which one travels in order to recognise and attain closeness to Allah (swt). Commonly known as Marifut and Qurb of Allah (swt). Treading this path develops the spiritual faculties of man for realisation of Divine Realities, the truth. Ultimately, one becomes a Friend of Allah (swt).

To fulfill this objective one begins by taking Bai’ah meaning “Oath of Alleginace” from one who has already travelled this path i.e a Friend of Allah (swt). They are also known by titles such as Murshid, Pir, Sheikh, Sufi Master, Saint, Sage etc .We will often use “Sheikh” or “Hadhrat” on our site.

After taking the oath of allegiance, in the hands of a Sheikh, there are many variations as to how the Sheikh will guide his Mureed to Allah (swt). These varying methods are known as Tariqahs or Sufi Orders.

The following four principles, however, are emphasised and form the basis of all legitimate tariqahs:

The following diagram illustrates the science of Sufism in a nutshell: 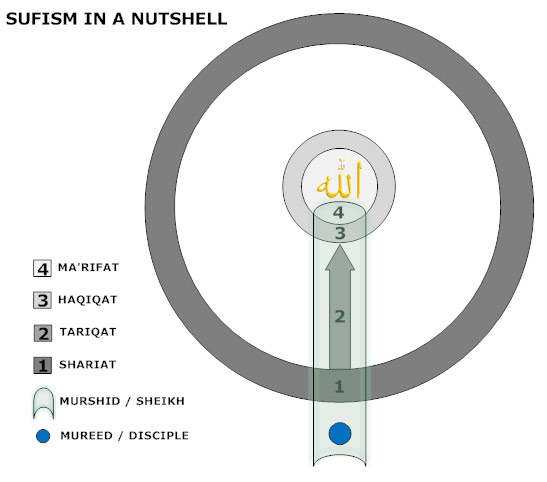 When one has been purified from all spiritual and character blemishes one will have arrived at Haqiqat. Haqiqat also has ten stations. (Click here to learn more)

Once this has been gained true, sincere and complete love of Allah (swt) & His Rasul (saw) will be realised and
one will have been blessed with the Qurb (nearness) and Marifat (recognition) of Allah (swt). You will understand you have gained Marifat because it also has ten stations. (Click here to learn more)

At this point you will have fulfilled your purpose of life!

This site has been configured to introduce you to the theoretical and practical aspects of Sufism & to ecourage you to take a step in this direction. Please use the menu on the left to learn more about all the various stations & aspects of Sufism. We have also provided the “Mureed Handbook”, “The Shariah” and “The Blessed Sunnah” for existing Mureeds who need help in progressing towards Allah (swt).