We’d like to present the importance of bringing Zikr into our life, using a logical and mathematic model, whilst proving our conclusions from the Qur’an.

Let us begin by taking a close look at the relationship between the five pillars of Islam. Let us assume that the life of an average adult is 63 years and that his 13 years of youth are not taken into consideration after which all Islamic pillars become compulsory on him/her. Hence the value 50 will be used to determint the lifetime obligation value.

Table 1 below lists the pillars of Islam each with their respective lifetime obligation value. We have taken the Kalimah to represent Zikr.

The value for the Kalimah is not yet known. We hope to determine this later. Figure 1.1, below, is a graphical representation of the table above. The log graph shows the lifetime obligation values on the vertical Y axis against the five pillars respectively on the horizontal X axis. 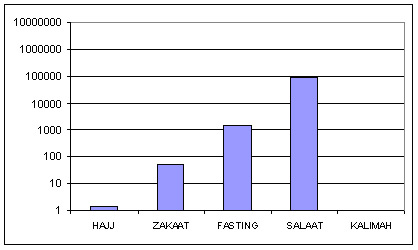 As you can evidently see there is a trend in the graph which suggests a proportional increase in obligation moving from one pillar to the next. If we were to complete the graph, proportionally, to include the value for the Kalimah, we would have a graph similar to Fig 1.2. 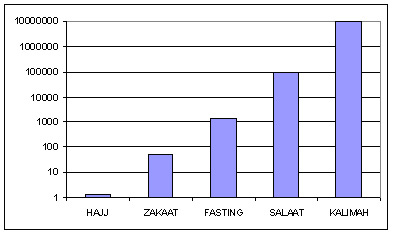 The lifetime obligation value for the Kalimah, which we can deduce from the graph, is approximately TEN MILLION! This value is 100 times larger than the value for Salaat, which is roughly 100,000. The following Qur’anic ayah then makes perfect sense! Allah (swt) says in the Quran:

We can now, therefore, conclude that the zikr of Allah is to be done over 100 times more often than we offer our prayers. Sound ridiculous? Allah (swt) says in the Holy Qur’an:

“When ye have offered your (Congregational) prayers, do the Zikr of Allah, standing, sitting & lying down on your sides”
Qur’an (Surah 4: Verse 103)

Since a person spends his entire life circulating between these three positions i.e standing, sitting & lying down, we can deduce that we have been requested to engage in the Zikr of Allah constantly in between our Salaats. So it is not surprising that the value for the Kalimah, which is a form of zikr, would far exceed that for Salaat.

This almost sounds like one is to be in continuous zikr throughout one’s life doesn’t it? Now why would Allah (swt) ask this from us? Surely this is something which is impossible & impracticable?

We shall shortly understand how all of this makes perfect sense and is quite logical. We’ll give you a clue: Qalbi Zikr.