The Prophet Muhammad (Allah bless him and give him peace) said, â€œWhoever prays on Laylat al-Qadr out of faith and sincerity, shall have all their past sins forgiven.â€ [Bukhari and Muslim, from Abu Hurayra (Allah be pleased with him)]

The Prophet (Allah bless him & give him peace) also said, â€œSeek it in the last ten days, on the odd nights.â€ [Bukhari and Muslim from Abu Sa`id al-Khudri (Allah be pleased with him)]

The scholars affirm that it is the best of nights, [al-Fatawa al-Hindiyya, quoting Mi`raj al-Diraya, 1.216] because of Allah Most Highâ€™s words,

Given the tremendousness of this night, it is recommended to seek this night, and to worship Allah in it, with prayer, supplication (du`a), remembrance (dhikr), and other actions. [Ibn Abidin, Radd al-Muhtar, quoting Mi`raj al-Diraya, and Nawawi, al-Majmu`] Because obligatory acts are more beloved to Allah than supererogatory ones, the most important thing for men is to pray both Isha and Fajr at the mosque.

When is it?
There is great difference of opinion about this, because it is of the matters whose certain knowledge has been lifted by Allah Most High from this Ummah, for the wisdom that people strive to seek it:

In general, it is agreed that it is most likely to be in the last ten nights of Ramadan, with the odd nights being more likely. Of the odd nights, the night of the 27th (which is the night before the 27th of Ramadan, for the Islamic day starts with nightfall) is most likely. Imam Shafi`i said that it is most likely to be the 21st, then the 23rd, then the 27th. Imam Nawawi followed the position of Imam Muzani and Imam Ibn Khuzayma that it moves around within the last ten nights. [Nawawi, al-Majmu` Sharh al-Muhadhdhab, 6.488]

However, it could be outside the last ten nights within Ramadan. It may even be outside Ramadan according to both early and late scholars. This has been transmitted from many of the Companions of the Prophet (Allah bless him & give him peace), including Ibn Mas`ud (Allah be pleased with him). It is one of the reported positions of Imam Abu Hanifa, and also of many of the great knowers of Allah, including Ibn Arabi (whose position is quoted by Ibn Abidin with support), Abuâ€™l Hasan al-Shadhili, Sha`rani, and many others.

May Allah give us the success of following in the footsteps of the inheritors of the Prophet (Allah bless him & give him peace), outwardly and inwardly, and may He make us of those whom He loves.

This is one of the many reasons why one should strive to establish the night vigil prayer (tahajjud), daily.

It has been reported that, â€œOnce the last ten [days of Ramadan] started, the Messenger of Allah (blessings and peace be upon him, his family, and companions) used to spend the nights in worship, wake his family, strive, and tighten his belt.â€ [Bukhari and Muslim] Tighten his belt refers to determination.

The established position of Abu Hanifa and his two main companions, Abu Yusuf and Muhammad ibn al-Hasan (Allah have mercy on them) is that it is specific to Ramadan. Abu Hanifa said that it is not a fixed day but, rather, it moves around in the month. [Ibn Abidin, Radd al-Muhtar, from al-Bahr and al-Kafi] As for the hadiths about it being the night of the 27th, Ibn Abidin mentions that Abu Hanifa explained them as meaning a particular year.

Ibn Abidin quotes Ibn Nujaymâ€™s Bahr al-Raâ€™iq that this is one transmitted position of Abu Hanifa. Another, mentioned in Qadikhanâ€™s Fatawa al-Khaniyya, one of the most important works for fatwa in the school, is that the famous transmission from Imam Abu Hanifa is that it moves around the entire year; it could be in Ramadan, and it could be in another month.

Ibn Abidin said,
â€œThis is supported by what the Master of the Knowers of Allah Sayyidi Muhyi al-Din Ibn Arabi mentioned in his Futuhat al-Makkiyya, â€˜People differed about Laylat al-Qadr. Some said it moves around the entire year. This is my position, for I have seen it in the month of Sha`ban, and in Rabi`, and in Ramadan. I have seen it most, though, in the month of Ramadan, and, specifically, in the last nights. I saw it once in the second third of Ramadan, on an even night, and once on an odd night. Therefore, I am certain that it moves around the entire year, on both odd and even nights.â€™

And there are many opinions regarding this, which reach 46 different positions.â€ [Ibn Abidin, Radd al-Muhtar]

This is reported to be the position of Ibn Mas`ud (Allah be pleased with him) and other great Companions. [As mentioned by Bututi in his Kashshaf al-Qina`, and others; for the many narrations from the Companions and Followers about Laylat al-Qadr, see Ibn Abi Shaybaâ€™s Musannaf]

Imam al-Nafrawi al-Maliki mentions in his al-Fawakih al-Dawani fi Sharh Risalat Ibn Abi Zayd al-Qayrawani that the position of Imam Malik, Imam Shafi`i and Imam Ahmad, and the majority of the scholars is that Laylat al-Qadr is not a specific night. Rather, it moves around.

Imam Sarakhsi mentions in his Mabsut, a 30-volume masterpiece of Hanafi legal reasoning, proofs, and comparative fiqh that was mainly authored by dictation to students while unjustly imprisoned in a pot well, that the position of most of the Companions (Allah be pleased with him) was that it is on the night of the 27th. (3.127) This understood, others explain, to mean that its most likely night is the night of the 27th of Ramadan. [As in Ruhaybaniâ€™s Matalib Uliâ€™n Nuha Sharh Ghayat al-Muntaha 2.225 in Hanbali fiqh]

As you can see no one knows exactly when the Laylatul Qadr is. Most of us practice extra ibaadat on the 27th and there is evidence to suggest that this might be the night. But no one is 100% sure. What if it was the 21st or the 23rd. What I suggest is that you offer some extra worship on all the odd nights and then the most on the 27th. This way you cover all the bases. Also many of us spend our time in the Masjid socialising with our friends. This is not the way to spend your time in worship. Others offer 50/100 Nafl even though they have years of Qaza salah outstanding. My brothers and sisters in Islam the aim is to offer worship not have a competition of how many nafl you have read. Offering Qaza is worship and so is reading Nafl. Reading Qaza has two benefits. One is the act of worship and the other is repaying the debt of missed salah.

Some ibaadat that you can do is to recite the Quran, offer Qaza/nafl salah, Read Salatul Tasbee, Do Dhikr of Allah SWT, Send Darood and Salam Upon Nabi SAW and make as much dua as possible, asking for forgiveness for yourself, your family/friends and the Muslim Ummah.

A good wazaif to recite is “Allahuma Innaka Affuwwun, Tu hibbul afwa, Fa’fu Anny” meaning “Oh Allah You are the Forgiving, You love to forgive, So please forgive me”

Salaatul Tasbeeh is perhaps the most famous Salaat performed on auspicious nights. This is how you perform it. 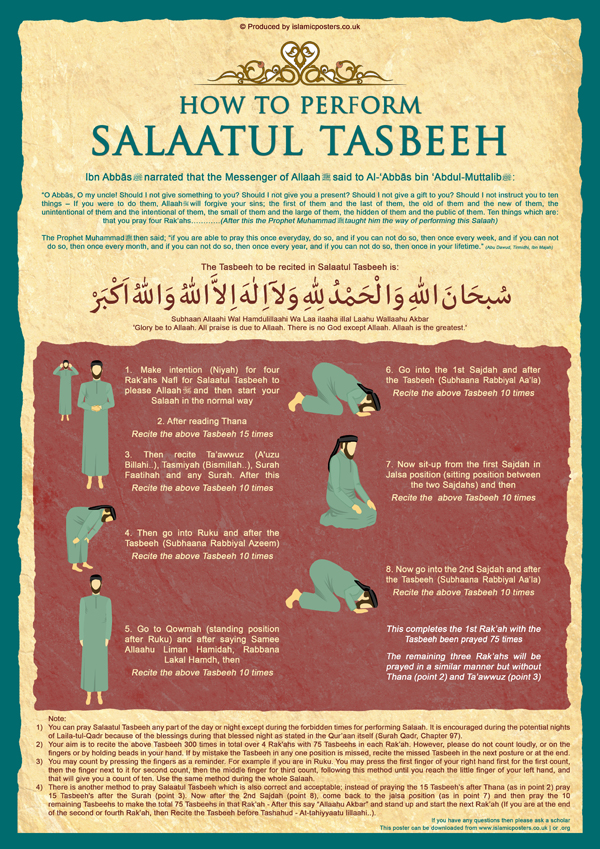 Incase you can’t read/see/understand the above

Goal is to recite above Tasbih 300 times in Four Rakah with the following method.

1. In the first rakaat, after reading Sana “Subhaana Kallahumma…”, read the above tasbih 15 times.

9. Do rakah #2 in same fashion, but before reading Bismillah “Bismillah…”, and Surah Fatiha, read the tasbih 15 times. Follow the rest as you did in first Rakat.

10. After second Sajdah of Second Rakat sit in Qaidah Oola (first sitting) read Attahiyat, Durood and Dua then get up for 3rd rakaat without saying Salam.

11. Begin third Rakat, just like the first Rakat, with Sana “Subhaana Kallahumma…”, read the above tasbih 15 times. Follow the rest as you did in first Rakat untill you sit for Qaidah Akihra (last sitting) after second sajdah of fourth Rakah.
In Qaidah Akihra Attahiyat, Durood, Dua finish Salah with Salam.

Special notes for Salat-Ul-Tasbih:
1) Do not count loudly. It will break Salah
2) Do not count on fingers or by holding a Bead Tasbih in hand. It is Makruh.
3) You may count by pressing the fingers as a reminder. For example if you are in Ruku. You me press pinky of your right hand first for the first count, then the finger next to it for second count, then the middle finger for third count, following this method untill you reach the pinky of left hand will give you an exact count of ten. Use the same method in Qayam, Sajdah and Jalsa.
4) If missed a count then make it up in the next posture. For example if forgot to recite Tasbih after Surah in Qayam. Then you may recite Tasbish 20 times instead of 10 in Rukuh after “Subhaana Rabbiyal Azeem”. Missed Tasbih cannot be recited in Qayam after ruku and Jalsa between Sajdah. If you missed the Tasbih in Ruku then recite 20 in the first Sajdah instead of the Qayam after rukuh. Similarly if missed the Tasbih in first Sajdah then do not make it up in Jalsa. Instead recite missed tasbih in the second Sajdah. If Tasbih has been missed in last sajdah of second or fourth Rakah then you can recite the missed ones before Attahiyat in Qaidah.
5) If you miss a wajib in Salah and have to do Sajdah Sahaw. You dont have to recite Tasbih in Sajdah sahoo, since the 300 count has been estalished. But if you had missed Tasbih in any of the postures and remeber it now. Then you may recite the missed Tasbih in Sajdah Sahaw now.
6) It is preferable to recite after Surah Fatiha Sura Takathuur in the first rakaâ€™, Surah Wal Aâ€™sr in the second rakaâ€™, Surah Kaferoon (qul ya aiyuhal Kafiroon) in the third and Surah Ikhlas (Qul hu Allah-hu ahd) in the fourth rakaâ€™. If one does not remember these surah they can recite the ones they prefer.

There are some people who cannot perform any additional Salah or recitations for any reason, like illness or weakness or being engaged in some other necessary activities. Such people also should not deprive themselves completely of the blessings of this night. They should observe the following acts:

(i) To perform the Salah of Maghrib, ‘Isha’ and Fajr with Jama’ah in the mosque, or in their homes in case of their being sick.
(ii) They should keep reciting the dhikr, particularly the one mentioned in para (c) above, in whatever condition they are until they sleep.
(iii) They should pray to Allah for their forgiveness and for their other objectives. One can do so even when he is in his bed.
Please Note: Women during their periods cannot perform salah, nor can they recite the Qur’an, but they can recite any dhikr, tasbeeh, durood sharif and can pray to Allah for whatever purpose they like in whatever language they wish. They can also recite the Arabic prayers mentioned in the Qur’an or in the hadith with the intention of supplication (and not with the intention of recitation).

You obviously have an absolute craving to do something important or you have a desperate need that you really want Allah (swt) to fulfil..

either way I think you really need to take a look at the Khatm-e-Khawajgan:

Do NOT follow this link or you will be banned from the site!